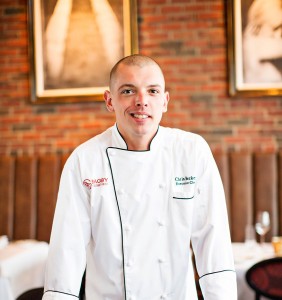 “A Baltimore native and veteran of several of the city’s most highly-regarded restaurants, Chef Becker oversees daily operations for all of the Bagby Restaurant Group restaurants including Bagby Pizza Company, Ten Ten American Bistro, Fleet Street Kitchen, Cunningham’s, and Cunningham’s Café & Bakery.  Chef Backer has been honored as one of the top “Chefs to Watch” by Baltimore Magazine and identified in 2011 as one of “Ten Professionals Under 30 to Watch” by the Baltimore Sun.  After joining the Bagby Group in 2011, he opened its third restaurant, Fleet Street Kitchen, to many accolades, including being named one of the top five restaurants in Baltimore by Baltimore Magazine. Among many achievements, he has been instrumental in the growth and development of Cunningham Farms, the group’s farm.  A consummate professional, Chef Chris is highly regarded in the Baltimore business community, known not only for his professional accomplishments but also his charitable activities which include membership on the board of the Cystic Fibrosis Foundation.”

Click below to listen to the audio from August 18th: